A majority — 55% — of the public say they are pessimistic about the direction of the country, a marked change from the roughly one-third (36%) that said the same in an ABC News/Ipsos poll published May 2. In the early May survey, Americans were more optimistic than pessimistic by a 28-percentage point margin. Optimism is now under water by 10 points. Looking ahead to the next 12 months, fewer than half — 45% — now report feeling optimistic about the way things are going, a significant drop from about two-thirds (64%) in the May poll.

The decline in optimism has occurred across the board among Democrats, Republicans and independents. Optimism is down about 20 points among Democrats and Republicans and down 26 points among independents. Among Democrats, about 7 in 10 (71%) now say they are optimistic about the direction of the country over the next 12 months. That’s much lower than the near universal (93%) approval from Democrats on Biden’s handling of the pandemic. In politics today, partisans usually are more unified in their support or opposition to particular issues or people.

The optimism-pessimism flip comes as Americans give Biden his lowest approval rating for his handling of the pandemic yet in ABC News/Ipsos polling. A little over 6 in 10 (63%) approve of the president’s response to the coronavirus, according to the poll, which was conducted by Ipsos in partnership with ABC News using Ipsos’ KnowledgePanel.

Although still a majority, it’s a nine-point drop from late March — the high for Biden. It likely reflects the growing concern that lockdowns could be reinstated and already vaccinated Americans could need a booster shot as the highly contagious delta variant now is estimated to account for 83% of all new coronavirus cases in the United States. As of Friday, according to Health and Human Services data obtained by ABC News, the United States’ daily case average was up 47% compared to the prior week, and on Wednesday, the nation recorded its highest single-day new case total since April.

Worry about a resurgence of the virus is also apparent when looking at how concerned the public is about contracting the virus.

According to this ABC News/Ipsos poll, about 6 in 10 Americans are concerned — 20% very and 42% somewhat — that they or someone they know will become infected with the coronavirus; about 4 in 10 (39%) are not concerned about this.

That’s the lowest level of concern in polling by ABC News/Ipsos going back to March 2020, but there is a significant gap since this question was last asked in early March of this year, when less than 20% of the U.S. population was at least partially vaccinated. Since then, every American 12 years and older has become eligible to receive a vaccine. In this ABC News/Ipsos poll, about three-quarters (74%) of U.S. adults say they have had at least one dose of a coronavirus vaccine, which, similar to other recent surveys, slightly overstates the number of Americans who have been vaccinated, according to data from the Centers for Disease Control and Prevention. The most recent CDC report, which could lag actual vaccinations by a few days, shows that 68.8% of the adult population had received at least one dose.

Concern about infection, according to this poll, is higher among those who are at least partially vaccinated than those who are not, 67% compared to 46%. But while a majority of unvaccinated U.S. adults say they are not concerned that they or someone they know will be infected with the virus, public health experts, including the CDC director, have warned that this is becoming a “pandemic of the unvaccinated.” 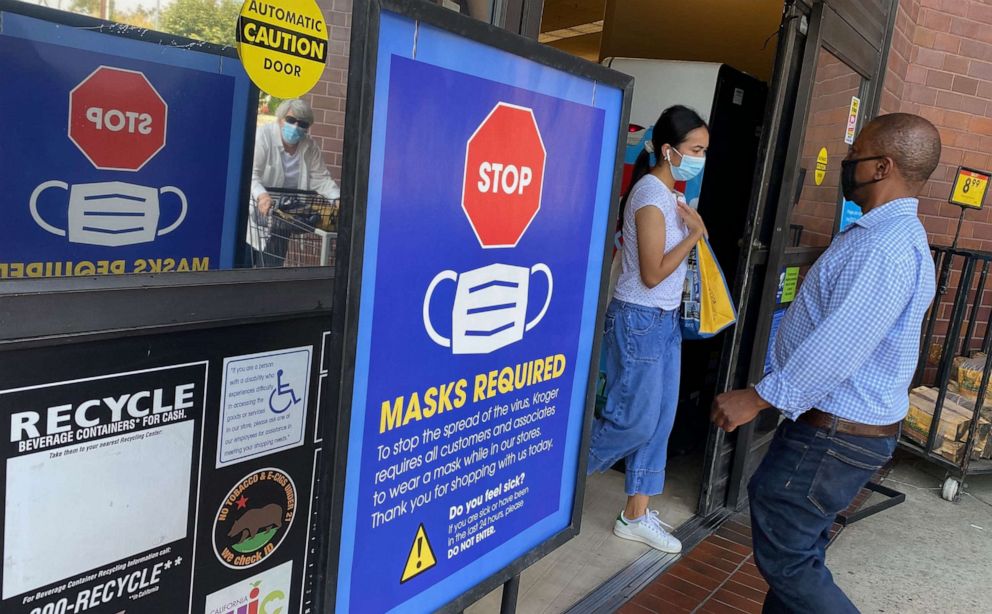 While ABC News/Ipsos did not poll on the level of concern for contracting the virus over the last four to five months, other polls have, and the public’s concern appears to be rising again.

Additionally, the level of approval for the president’s handling of the country’s economic recovery from the pandemic has also dropped by seven points since late March, when 6 in 10 approved, according to ABC News/Ipsos polling. Although jobless claims were expected to hit a new pandemic-era low Thursday, instead, they increased to a level last seen in mid-June, though it’s too soon to know if that will become a trend.

The overwhelming majority (88%) of Democrats approve of the president’s handling of the economic recovery, but only about half (49%) of independents do and less than 2 in 10 (16%) Republicans do.

On other issues, Biden’s approval is underwater, and lackluster even among his own party.

Fewer than 4 in 10 Americans approve of the president’s handling of immigration and the situation at the U.S.-Mexico border, crime and gun violence. Republicans have hounded Biden and Democrats over all three, as border crossings and violent crime rates, especially in Democrat-run U.S. cities nationwide, surge. That’s reflected in Republicans’ high level of disapproval — ranging between 86% and 92% — of the president’s handling of the three issues, according to this poll. 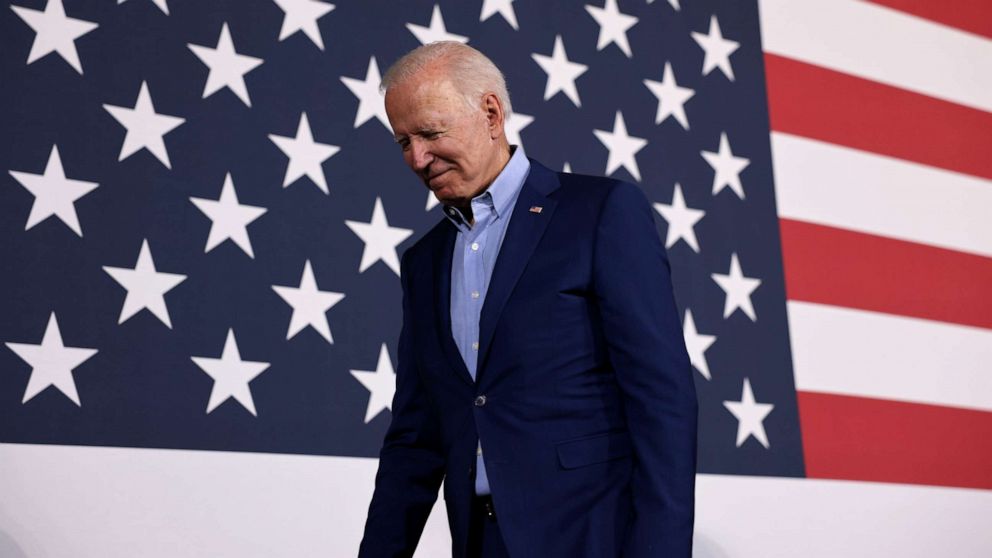 Among all Americans, the disapproval figures for crime and gun violence track closely with each other — both around 6 in 10 each — and disapproval of Biden’s handling of gun violence has ticked up slightly since late March among the public, from 57% to 61%.

An exception to these low ratings on issue- or policy-based performance is the president’s withdrawal of U.S. troops from Afghanistan, for which a majority (55%) of Americans approve.

Asked how well Biden’s delivered on his campaign promises, Americans are divided: 52% say he has done an excellent or good job keeping those promises, while 47% say he’s done a not so good or poor job.

METHODOLOGY – This ABC News/Ipsos poll was conducted by Ipsos Public Affairs’ KnowledgePanel July 23-24, 2021, in English and Spanish, among a random national sample of 527 adults. Results have a margin of sampling error of 5.0 points, including the design effect. Partisan divisions are 31-24-36%, Democrats-Republicans-independents. See the poll’s topline results and details on the methodology here.

DNA test kits for ancestry: how they work and how to choose the right one for you 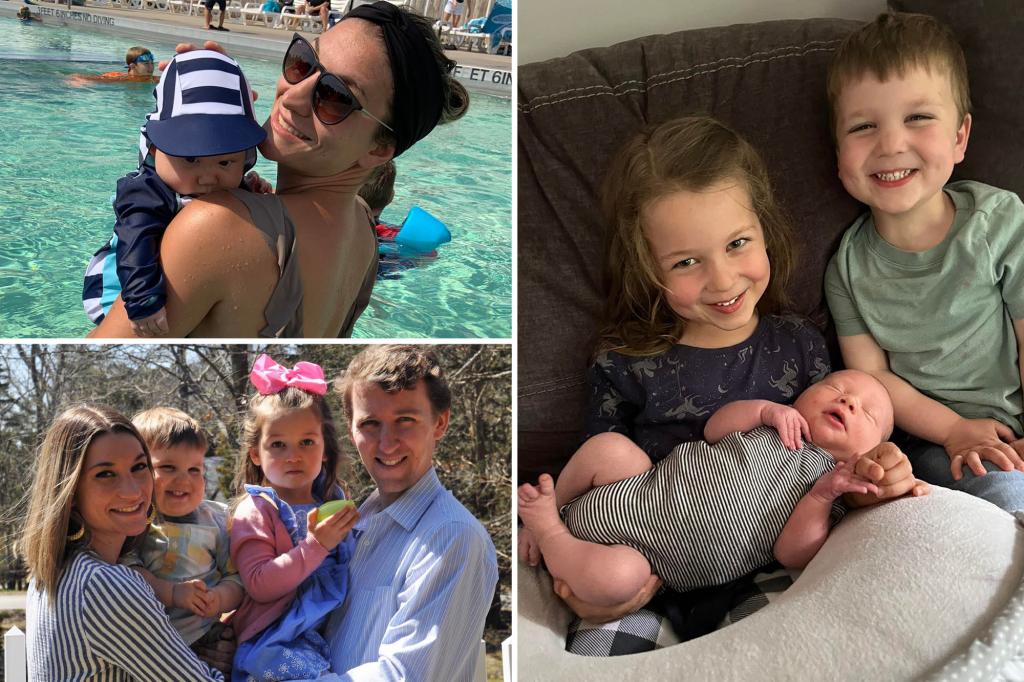 Source: the SEC is investigating Elon Musk's role in shaping Tesla's self-driving car claims, as part of a probe into the company's statements about Autopilot (Lydia Beyoud/Bloomberg)

Sources: Joe Biden's administration has secured an agreement with the Netherlands and Japan to restrict exports of some advanced chipmaking machinery to China (Bloomberg)

From Pakistan – Official Trailer for ‘Joyland’ Directed by Saim Sadiq