Opinions expressed by Entrepreneur contributors are their own.

The King Of E-Commerce

“Our vision is to be the world’s most consumer-centric company, where customers can come to find anything they want to buy online.”- Jeff Bezos

Amazon founder Jeff Bezos is the second richest person in the world, behind Tesla founder Elon Musk. While Amazon and Bezos are household names with his various other business endeavors, including sending William Shatner and Michael Strahan to space on his sub-orbital spaceflight service, Blue Origin, the former Amazon CEO came from humble beginnings.

In fact, Bezos’ father, Miguel Bezos, migrated to the United States from Cuba, which had a great impact on his son’s entrepreneurial drive. Working with the Statue of Liberty Ellis Island Foundation, Bezos honored his dad at the 2022 Statue of Liberty-Ellis Island Awards, explaining, “He spoke no English, he had to make his way,” at the event. “He had those tough experiences. I think in every immigrant you’ll find a deep optimism and a deep resilience too.”

As the child of an immigrant, Bezos’ rise to success is a true American dream. Keep scrolling for more details on how Bezos made Amazon what it is today.

How did Jeff Bezos start Amazon?

In 1994, former Amazon CEO Jeff Bezos was already extremely successful by most peoples standards. The youngest-ever senior vice president at Wall Street investment bank DE Shaw & Co. , the then 30-year-old Princeton University graduate was already making an estimated six-figure salary and was destined to rise even further in the company ranks. But Bezos had other plans.

Fueled by a secret passion for the infant business of electronic retailing, Bezos dreamed of creating his own company in the vast, then virtually uncharted wilds of the World Wide Web. It was a risky move, but it quickly paid off. Just four years after Bezos created Amazon.com, the virtual bookstore became the template for how e-commerce businesses should be run, with sales of more than $610 million and more than 13 million customers worldwide.

Bezos first got the idea to start an Internet enterprise in 1994. While surfing the Internet in search of new ventures for D E Shaw to invest in, he came across the statistic that World Wide Web usage was growing by 2,300 percent a month. Bezos immediately recognized the expansive possibilities of selling online and began exploring the entrepreneurial possibilities of developing an Internet business.

He drew up a list of 20 potential products he thought might sell well via the Internet, including software, CDs and books. After reviewing the list, books were the obvious choice, primarily because of the sheer number of titles in existence. Bezos realized that while even the largest superstores could stock only a few hundred thousand books, a mere fraction of what is available, a “virtual” bookstore could offer millions of titles. The die was cast. Bezos passed up a fat bonus, packed his wife, MacKenzie Bezos, and their dog, Kamala (named after an obscure “Star Trek” character), and headed for Seattle.

For Bezos, Seattle was the ideal city for his new business. Not only was it home to a tremendous pool of high-tech talent, it was also in close proximity to Ingram Book Group’s Oregon warehouse. While MacKenzie drove, Jeff spent the trip pecking out a business plan on a laptop computer and calling prospective investors on a cell phone. With $1 million raised from family and friends, Bezos rented a house in Seattle and set up his business in the garage.

For nearly a year, Bezos and a crew of five employees worked out of the garage, learning how to source books and setting up a computer system that would make Amazon.com easy to navigate. A true marketing visionary, in addition to creating a user-friendly interface that would streamline the “needle in a haystack” process that bookstore shopping often entails, Bezos wanted to establish a “virtual community” where visitors could “hang out.” To achieve this goal, he and his team created a number of innovative programs, including one that would let customers add their own book reviews to the site and a feature that recommends books based on a customer’s previous purchases.

In July 1995, Amazon.com opened its virtual doors, calling itself “Earth’s Biggest Book Store,” with more than 1 million titles to choose from. Fueled by word of mouth, or more accurately, word of e-mail, Amazon.com rocketed off the line like a nitro-burning dragster. Enraptured by the enormous selection of books, the superior customer service and the user-friendly design of the site, Internet users ecstatically plugged Amazon.com on Internet newsgroups and mailing lists.

Amazon’s success did not go unnoticed by bookstore giant Barnes & Noble, who quickly put up its own website. To combat Amazon’s claim that it was “Earth’s Biggest Bookstore,” Barnes & Noble embarked on an aggressive marketing campaign proclaiming that they offered twice as many books as Amazon. But it was a strategy doomed to failure. The forward-thinking Bezos had already expanded Amazon’s product line to include CDs and replaced “Earth’s Biggest Book Store” with the tagline “Books, Music and More,” leaving Barnes & Noble, as one writer put it, “wrapping its fingers around the neck of a phantom.”

While Amazon has left its closest competitor in the dust, the company set its sights on conquering all of online retail. In 2019, it was believed that Amazon controlled 37% of all online retail sales, thanks to the company’s relentless expansion and acquisition strategy. In late January 1999, Amazon went after the $150 billion U.S. pharmacy market, buying a share of Drugstore.com, a company that sells everything from breath mints to Viagra online. They have since deepened their footprint in the healthcare world. In 2018, Amazon acquired PillPack, an online full-service pharmacy. Plus, in addition to Amazon’s continual expansion, Bezos also launched Amazon Web Services providing on-demand cloud computing platforms, and he owns The Washington Post among many other business endeavors.

How much of Amazon does Jeff Bezos own?

Previously owning 16 percent of the company, the Amazon employee sold $8.8 billion worth of his Amazon stock after stepping back as Amazon CEO to become executive chairman in July 2021. Despite owning less than 10 percent of the company today, his net worth is estimates to be a whopping $171 billion, per Forbes.

Prior to leaving his position as CEO, Bezos went through a very public divorce with his now ex-wife MacKenzie Scott in 2019. After 25 years of marriage, MacKenzie received 4 percent of Amazon in the settlement valued at $38 billion. Since their split, MacKenzie went on to marry Seattle school teacher Dan Jewett in March 2021, while the Amazon founder has been dating girlfriend Lauren Sanchez since 2019.

What is Jeff Bezos doing now?

Now with more time on his hands, Bezos is of course philanthropic thanks to his Bezos Family Foundation, however, he’s still very much embroiled in the criticism wealthy corporations like his garner on the issue of corporate taxes.

In fact, president Joe Biden slammed organizations like his via Twitter as tensions around inflation rise. “You want to bring down inflation? Let’s make sure the wealthiest corporations pay their fair share,” President Biden tweeted on May 13, 2022, to which Bezos replied, “Raising corp taxes is fine to discuss. Taming inflation is critical to discuss. Mushing them together is just misdirection.”

The newly created Disinformation Board should review this tweet, or maybe they need to form a new Non Sequitur Board instead. Raising corp taxes is fine to discuss. Taming inflation is critical to discuss. Mushing them together is just misdirection. https://t.co/ye4XiNNc2v

Although Amazon didn’t pay federal income tax in 2017 and 2018, Bezos doesn’t think big business are to blame for inflation. “They know inflation hurts the neediest the most. But unions aren’t causing inflation and neither are wealthy people,” Bezos added in response to the White House and Biden administration.

Zooey Deschanel Embraces the Word ‘Quirky’ and Thinks Businesses Should Too

A Simple (But Not Easy) Guide to Achieving Almost Any Dream

A Billionaire Who Operates More Than 2,400 Franchises Knows These Types of Franchisees Make the Most Money

The Paradox of Celebrity Tequila

Social Media Was Draining Me, So I Gave It Up. My Business Has Never Been Stronger.

Free Guidebook: How to Buy the Right Franchise For You

Discover tips and advice straight from the pros about finding your ideal franchise that matches your interests, goals, and financial needs in our Entrepreneur Insights guidebook. Download your free copy now!

‘What a Shame’: A Generation Mourns as Apple Announces It Will Discontinue Beloved Device

A Billionaire Who Operates More Than 2,400 Franchises Knows These Types of Franchisees Make the Most Money

Elon Musk’s Rival Hastily Deletes Twitter Account: ‘I Do Not Want My Free Speech to Be Actively Managed’

The latest news, articles, and resources sent to your inbox.

I understand that the data I am submitting will be used to provide me with the above-described products and/or services and communications in connection therewith.

Entrepreneur® and its related marks are registered trademarks of Entrepreneur Media Inc. 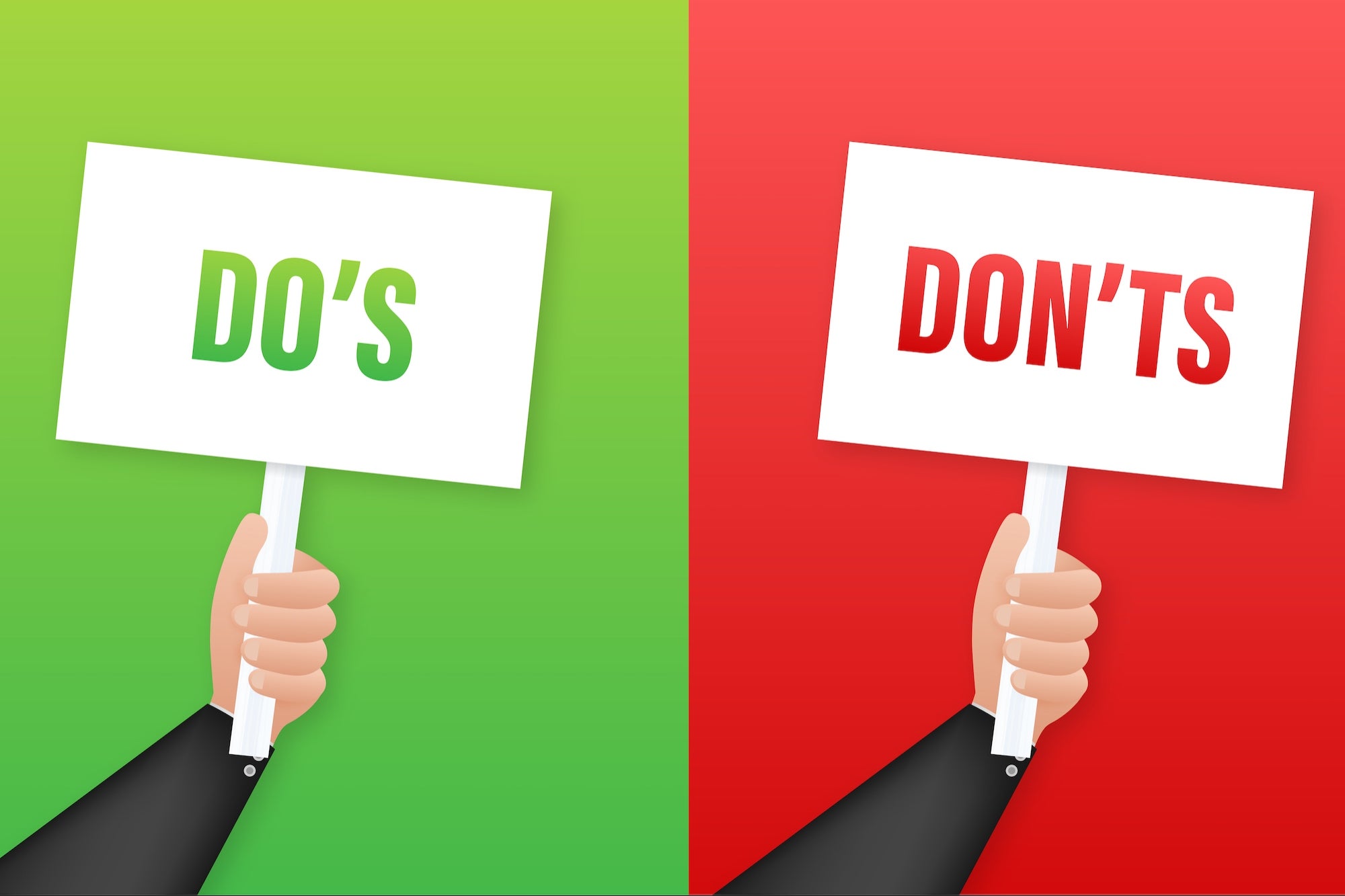 How to Get Funding: The Dos and Don’ts of Raising Capital From Investors