Pakistan will ask international lenders for billions of dollars worth of new loans to rebuild the country after calamitous floods uprooted 33mn people and pushed its cash-strapped economy even closer to insolvency.

Prime Minister Shehbaz Sharif said Islamabad was not trying to reschedule its external debt, worth about $130bn, but it did need “huge sums of money” for “mega undertakings” such as rebuilding roads, bridges and other infrastructure damaged or washed away in a deluge scientists have linked to climate change.

“We are not asking for any kind of measure [such as] a rescheduling or a moratorium,” Sharif told the Financial Times. “We are asking for additional funds.”

Pakistan’s leader would not be drawn on the exact amount his government was seeking, but repeated the $30bn estimate of the damage caused by the floods, the worst natural disaster in the country’s 75-year history.

“There is a gap — and a very serious gap — which is widening by the day between our demands and what we have received,” Sharif said at his home in Lahore’s upscale Model Town neighbourhood.

The prime minister also hinted that the failure of the international community to rally resources risked fuelling political instability in the nuclear-armed state, where populist opposition leader Imran Khan has been capitalising on widespread discontent.

“We are obviously concerned because if there is dissatisfaction leading to deeper political instability and we are not able to achieve our basic requirements and goals, this can obviously lead to serious problems,” Sharif said. “I’m not saying it in terms of any kind of threat, but I’m saying there’s a real possibility.”

French president Emmanuel Macron has promised to host a donors’ conference to boost Pakistan’s fundraising efforts. No date has been set for the conference but Sharif said he expected it to take place in Paris in November. The UN is finalising its own assessment of the amount Pakistan will need to rebuild after the floods.

Sharif, younger brother of former prime minister Nawaz Sharif, took power in April after Khan lost a no-confidence vote. His government narrowly staved off a liquidity crisis by securing a $1.1bn disbursement from the IMF in August as well as pledges of financing from China, Saudi Arabia and other bilateral lenders.

Pakistan has had a long and tortuous relationship with the IMF, which has repeatedly urged the country to abandon unfunded energy subsidies that have cost the state heavily at a time of rising global prices.

Khan introduced a round of petrol and diesel subsidies in his final days in office, which Sharif’s government slashed in June to control spending and mend fences with the IMF.

Then, unusually heavy monsoons this year submerged swaths of Pakistan’s low-lying and normally arid Sindh and Balochistan provinces. The countryside remains chequered with pools of stagnant water that are causing skin diseases, malaria, dengue and other ailments.

Last month the UN Development Programme suggested Pakistan suspend debt repayments and seek to restructure its loans because of a “climate change-induced crisis”.

The devastation has also prompted environmental activists to call for “climate reparations” that would be paid by richer countries with higher emissions to lower-emitting nations suffering the brunt of climate change.

However, Sharif said: “We are only asking for climate justice, we are not using the word ‘reparations’ at all.”

Pakistani officials have been mindful of honing their pitch for international help — and emphasising their own efforts — at a time when western countries face competing demands for emergency funds to defray soaring energy prices and support Ukraine’s defence against Russia. 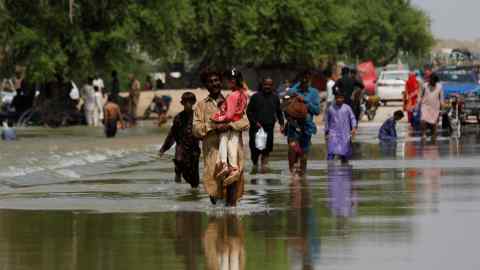 The prime minister said Pakistan had been tapping state coffers to help displaced families and buy provisions such as tents, medicine, food packs and drinkable water.

Islamabad has been making its case for emergency aid on the international stage, including at the UN General Assembly and last week’s Central Asia-Russia summit held in Astana, Kazakhstan. Sharif said Pakistan would also “seek additional funding from wherever we can”.

“We are in a war against climate change-induced havoc, and we have become a victim,” Sharif said. “Tomorrow another country can and we don’t want that to happen.”

Are you curious about the FT’s environmental sustainability commitments? Find out more about our science-based targets here

House Of The Dragon: 10 Best Power Couples In The Show