Actress and comedian Katherine Ryan has revealed she had to keep her pregnancy a secret for fear of missing out on career opportunities.

The 38-year-old made the admission in a new interview with The Sun, telling the publication she was eight months pregnant when hosting UK dating show Ready To Mingle last year and no one at the network knew about it.

“During my pregnancy, I wasn’t telling anyone. You can’t get insured on any production if you are pregnant,” she said. “Sometimes, if you are important enough, they go the extra mile. You see [British TV host] Holly Willoughby pregnant, and that’s because she’s worth it.”

“I tried to keep it secret. People just thought I was really fat for ages,” Ryan added. “I had to keep it quiet. I still needed to work to feed my family.”

The entertainer shares her now-one-year-old son, Alex, with partner Bobby Kootstra. Ryan also has a daughter Violet, 12, from a previous relationship.

“If you go on the BBC’s insurance site it says it doesn’t insure for any matters of the womb,” she claimed as to why she lied to TV bosses. “If your vagina falls off on set, that’s it. You don’t want to let down a production if you have some complication of pregnancy … It is so weird, so I just lied.”

Prior to welcoming baby Fred in June 2021, Ryan tragically suffered two miscarriages – an ordeal she bravely shared on Instagram.

“A year ago, exactly two months after losing our second pregnancy at 13 weeks, I saw this light in the shower and took a pic because I knew it was Fred,” she revealed back in October.

“During #pregnancylossawareness month, I hope your non-linear journey proves to be a happy one in the end.” 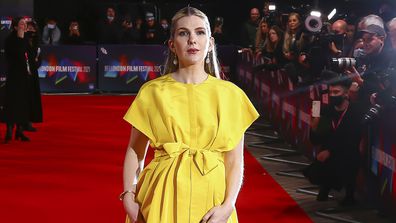