“Andy Warhol’s greatest work of art is Andy Warhol.” The perfect quote to introduce this trailer. Netflix has revealed an official trailer for a docu-series called The Andy Warhol Diaries, made by acclaimed doc filmmaker Andrew Rossi, and executive produced by Ryan Murphy. After he’s shot in 1968, Andy Warhol begins documenting his life and feelings. Those diaries, and this docuseries, take a peek behind his persona. This breathtakingly expansive, six-part portrait of a legend chronicles the remarkable life of Andy Warhol from the intimate vantage point offered by the artist’s own posthumously published diaries. The filmmakers say that “The Andy Warhol Diaries deftly validates Warhol’s belief that the idea is not to live forever but to create art that will.” It also features many of those who worked, created, and played alongside him from the subversive to the mainstream, from John Waters to Rob Lowe. This looks utterly fascinating, going beyond just his art, beyond just his public displays, diving deeper into who he was and what he stood for and his personality. I’m curious to watch! Always enjoyable to learn about artists, especially one as prolific as Andy. 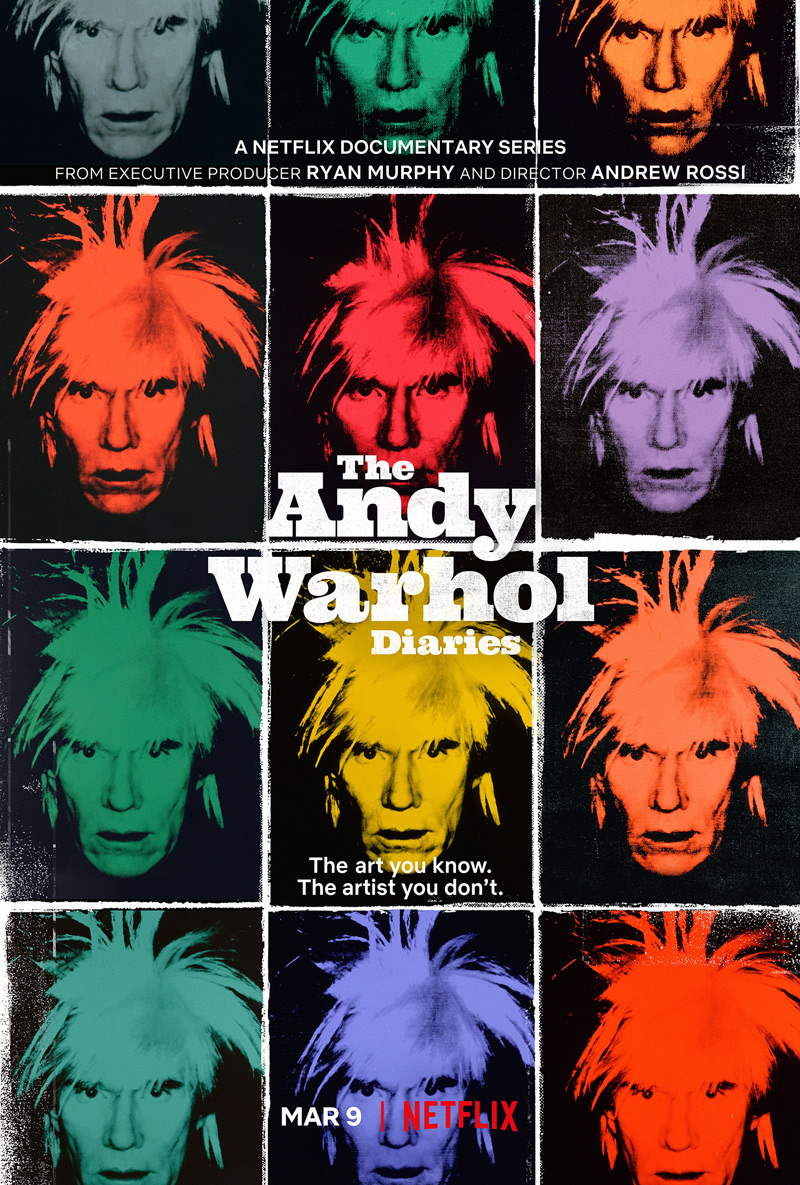 From executive producer Ryan Murphy and director Andrew Rossi, this breathtakingly expansive, six-part portrait of a legend chronicles the remarkable life of Andy Warhol from the intimate vantage point offered by the artist’s own posthumously published diaries. Beginning with his childhood in Pittsburgh, the series traces Warhol’s almost unbelievably diverse journey fluidly moving between mediums and through eras as an artist —both revered and reviled — director, publisher, TV producer, scene maker, celebrity and much more. While he was a larger than life figure, Warhol was intensely private regarding his personal life. This series truly reveals much about the very complex man through his own words — often in his own voice through the use of cutting-edge AI tech — and those who worked, created, and played alongside him from the subversive to the mainstream. The Andy Warhol Diaries is directed by acclaimed doc producer / filmmaker Andrew Rossi, director of the docs Eat This New York, Le Cirque: A Table in Heaven, Page One: Inside the NY Times, Ivory Tower, The First Monday in May, Bronx Gothic, and After Truth. Netflix will debut The Andy Warhol Diaries streaming starting March 9th, 2022. Who’s interested in watching?

Anne Heche “Not Expected To Survive” After Severe Brain Injury, Will Be Taken Off Life Support