Paulina Porizkova is challenging beauty standards in a candid admission about ageing gracefully without filler or Botox.

The Czech-born model, 56, took to Instagram to share a raw photo of her “untweaked” face with a message for women who accuse her of “being superior” for not getting work done.

Porizkova showed fans her wrinkles and fine lines in a close-up portrait of her ageing face, writing: “Ok, let’s talk tweaking for a moment.”

READ MORE: Abigail Breslin hits back at trolls calling her a ‘pathetic loser’ over mask photo after her dad died of COVID-19

“When I post no Botox no fillers hashtags, I get a fair amount of criticism from women assuming I’m somehow being superior.

“And I always have a knee jerk reaction to this — wanting to defend myself. No, no, I want to say, I’m merely going for representation. This is what it looks like to be an un-tweaked woman of 56, (ok, so on a good day and in great light).”

Porizkova — who uses her social media to promote body positivity and normalise imperfections — said she wants to see more photos of “untweaked” women and criticised the beauty industry’s idea of “artificial perfection”.

“I, personally, want to see other women who haven’t tweaked, so I have a sense of what being my age looks like,” she continued.

“In our new world of artificial perfection, sometimes it’s impossible to tell what is what, and I’m trying to clarify it for you the way I’d like it clarified for myself.”

The former Sports Illustrated model clarified she doesn’t judge women for using Botox or filler, however said either decision should be supported.

READ MORE: Two years on: How Harry and Meghan’s lives have changed since their royal exit

Porizkova also revealed she has “non-invasive” laser treatment to boost her collagen – but that’s all.

“I have zero objections to women seizing their power in any way they see fit. Yes, this is how I see tweaking. Seizing your power and putting it into play. Good for you,” she continued.

“Remaining tweak free is acceptance. Can you do both? I have no idea. I’m trying, but so far, I keep falling into the muddy middle.”

The frank Instagram post triggered messages of support from fans and friends, who applauded Porizkova’s courage and positivity.

“First of all you look amazing and also natural and untweaked by knives or filler. I think it takes great courage in this day to and age to show the world how a supermodel ages normally with taking good care of herself…,” one person wrote

“I appreciate you leading the way on this. It’s long overdue! Aging is difficult for women and makes us even harder on ourselves than we already were. You’re in a powerful position to lead by example,” another said.

Porizkova rose to fame as a model in the 1980s and became the first woman from Central Europe to pose on the cover of Sports Illustrated in 1984. 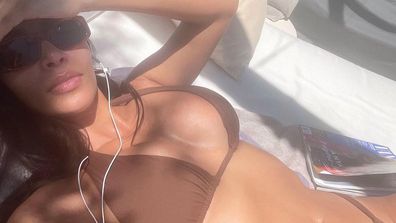 The Ozark season 4 trailer has everyone breaking bad