In 1997, Joel Anderson went to visit a friend at Stanford when he got the itch for a road trip. They piled into a car with two other buddies and a specific, faraway destination in mind:

What was then famously — and infamously — known as South-Central Los Angeles.

Anderson, a Houston native, wanted to see the neighborhood he only knew about through hip-hop lyrics and the L.A. riots, which had occurred just five years earlier. He took photos at swap meets that were crucial petri dishes for the evolution of West Coast rap. But the excitement soon faded as the friends drove past empty lots, burnt-out buildings, beat-up streets.

“I remember thinking, ‘Man this looks like a natural disaster,’” said Anderson, now 43. “When a hurricane hits [in Houston], you can just see like the scars of a hurricane for years after. The area’s never quite the same.”

South L.A.’s devastated landscape stuck with him as he embarked on an award-winning journalism career that has found him at Slate for the past six years. He eventually wanted to return to the neighborhood and the uprising, because he felt the saga was “a fascinating history of law enforcement in America” and a case study about how “anger building within the community” could so easily explode.

But not being from California, let alone Los Angeles, weighed on him when Anderson pitched the L.A. riots last year as a subject for the latest season of “Slow Burn,” Slate’s award-winning podcast that takes deep dives into history-altering scandals. It didn’t assuage his fears that once his bosses approved, his lead producer would be 30-year-old Jayson De Leon, an East Coaster who wasn’t even a year old when the uprising happened.

“If somebody were to go to Houston and do a story about [music legend] DJ Screw,” Anderson said, “I’d be like, ‘Whoa, what do you know about my hometown?’”

I was one of those doubters when “Slow Burn: The L.A. Riots” debuted in November. I initially listened in to take copious notes in anticipation of an epic Twitter takedown. I mean, what could two outsiders working for a Brooklyn-based media company possibly tell us in Southern California about something millions of us experienced in real time, and that has lurked in our subconscious ever since?

Over eight episodes, “Slow Burn: The L.A. Riots” tells as complete a story of what led up to the L.A riots as any I’ve ever heard, seen, or read. The podcast starts with the obvious entry point — the videotaped beating of Rodney King by four Los Angeles Police officers and their subsequent acquittal. But it also expertly reconstructs the political, racial, and economic tensions that had been broiling in Los Angeles for decades and finally flamed up on April 29, 1992, in what Anderson described as “tragic kismet.”

The various threads woven together — mistrust between Korean shopkeepers and Black customers, Latino poverty, out-of-control law enforcement, a clueless political establishment — painfully re-create the disturbing tapestry too many of us now treat like a forgotten blanket.

“Slow Burn” accomplishes its task through archival audio, new interviews, and Anderson’s taut, gobsmacked narration — even though he knows what’s going to happen, Anderson still can’t believe it when he reveals the next plot twist. He touches on the big names — the late L.A. Mayor Tom Bradley, Police Chief Daryl Gates, former L.A. County Supervisor Zev Yaroslavsky. But he also talks with everyday citizens who got caught up in the furor and only slightly regret it today.

Anderson also takes time to humanize King, whom too many of us sadly remember as a punchline all because he was a punching bag for dirty cops.

And although the finale is dropping today — I couldn’t listen to a preview because Anderson and his team were working on it through Christmas — the conclusion is self-evident from the start.

“There’s obvious resonance. When you hear this show you’re like, ‘Oh, that sounds like a lot of the stuff that’s going on today,’” said De Leon.

“This is a continuum,” added Anderson. “You could think that the troubles that you’re going through in any one moment are unprecedented, or that the solutions to the problems are unique to your moment. But the bigger problem, the larger problem that, essentially, Black and brown people are not protected under the code of law … that is a persistent problem, and it’s one that we have not figured out.”

The two prepared by reading every newspaper and magazine article they could find about the King beating and the riots, and the many books and documentaries that came out in the aftermath (the bible of L.A. riot studies, Anderson said, is Lou Cannon’s 1997 book “Official Negligence”). Once they sketched out a tentative arc, De Leon reached out to potential subjects, and Anderson conducted the final interviews remotely. Because of COVID protocols, he never had a chance to visit South Los Angeles itself during production, a decision he feared might undercut the legitimacy of “Slow Burn.”

“I was worried that people in L.A. might be like, ‘What the hell? You guys have spent no time here, and you’re not from this area!’” he admits. “What would give you the right to tell this story?”

But Anderson does his job so well that you’d think he produced the whole series from a makeshift booth on the corner of Florence and Normandie. The podcast allows you to smell the smoke from smoldering buildings, feel the rage of residents, and get swept up in the heady mania that takes over people in chaotic crowds to at least understand why so many willfully attacked their own neighborhoods.

The most damning portrayal, unsurprisingly, is of Chief Gates, whom Anderson sets up as a Caesar-like figure who turns out to be a Nero fiddling away at a fundraiser in Bel-Air on the first night of the riots. But then, in a gut-punch of a turn, Anderson also collectively indicts us for how we remember King. In the most touching episode, Anderson talks to friends who remember him as Glen, a fun-loving guy who was trying to get his life back together before police officers ruined his life — and then the public piled on.

“Slow Burn” airs his heartfelt plea for peace — “Can we all get along” — and then follows it with a community activist who mocks King’s speech in a Stepin Fetchit dialect. There’s also an excerpt from a bit on the pioneering Fox sketch comedy show “In Living Color.” I remember laughing to the latter when it aired; as I listened to it again, I found myself disgusted at finding humor at the expense of a victim of police violence.

Anderson felt like me, then and now, and wanted his audience to experience that same visceral reaction. But he hopes that, ultimately, listeners realize that what happened to King and South L.A. then can still too easily happen today — and not just to a Black man in Los Angeles.

“I don’t have to do anything wrong for something to go wrong,” he said. “All it could take is one misunderstanding, one misstep, one terrified cop on a dark road for [something] to become a problem.” 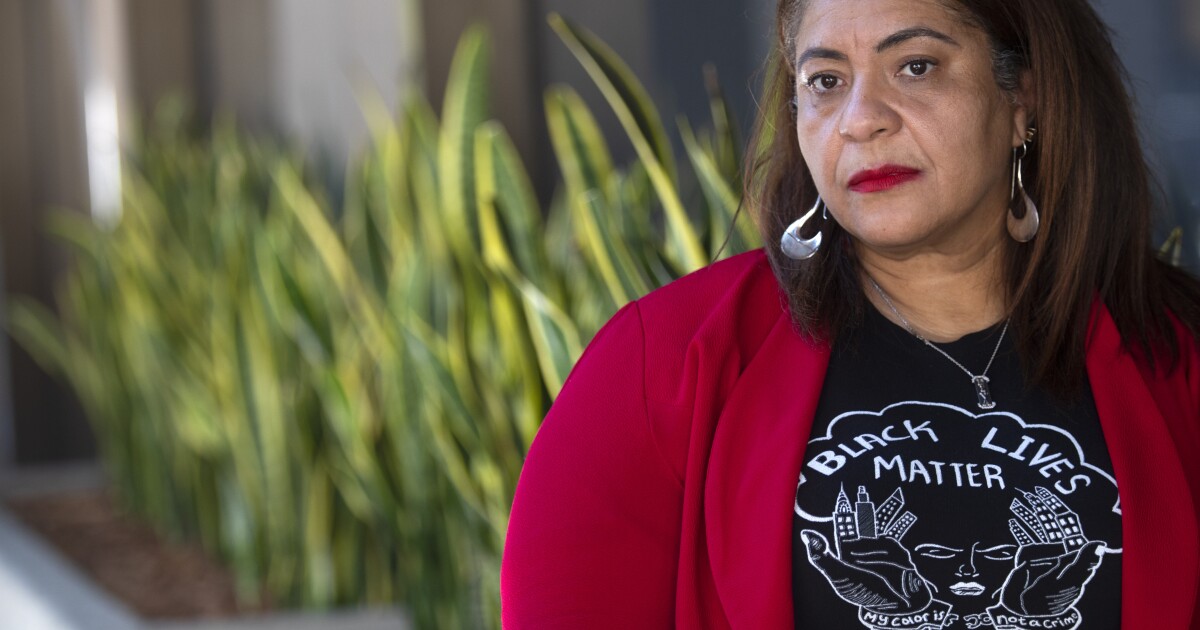