“He doesn’t need a reason to kill people… he needs a reason not to.” Sony Pictures has revealed another 60-second official trailer for Bullet Train, the upcoming summer action movie set mostly on a Japanese bullet train. Can’t wait to watch this soon! The plot involves five assassins aboard this train who discover their missions all have something in common. From the director of Deadpool 2, David Leitch, “the end of the line is only the beginning in a wild, non-stop thrill ride through modern-day Japan.” This trailer focuses on the “Big Bad Wolf”, another assassin with a connection to Brad Pitt. The Wolf is played by Puerto Rican rapper Bad Bunny, who also gets his own individual character poster (as seen below). He co-stars with Sandra Bullock, Aaron Taylor-Johnson (“Tangerine”), Joey King, Zazie Beetz, Logan Lerman, Michael Shannon, Brian Tyree Henry (“Lemon”), Hiroyuki Sanada (“Elder”), Andrew Koji (“Kimura”), with Masi Oka & Andrea Muñoz. I don’t really need any more trailers, I’m totally sold on this movie already. 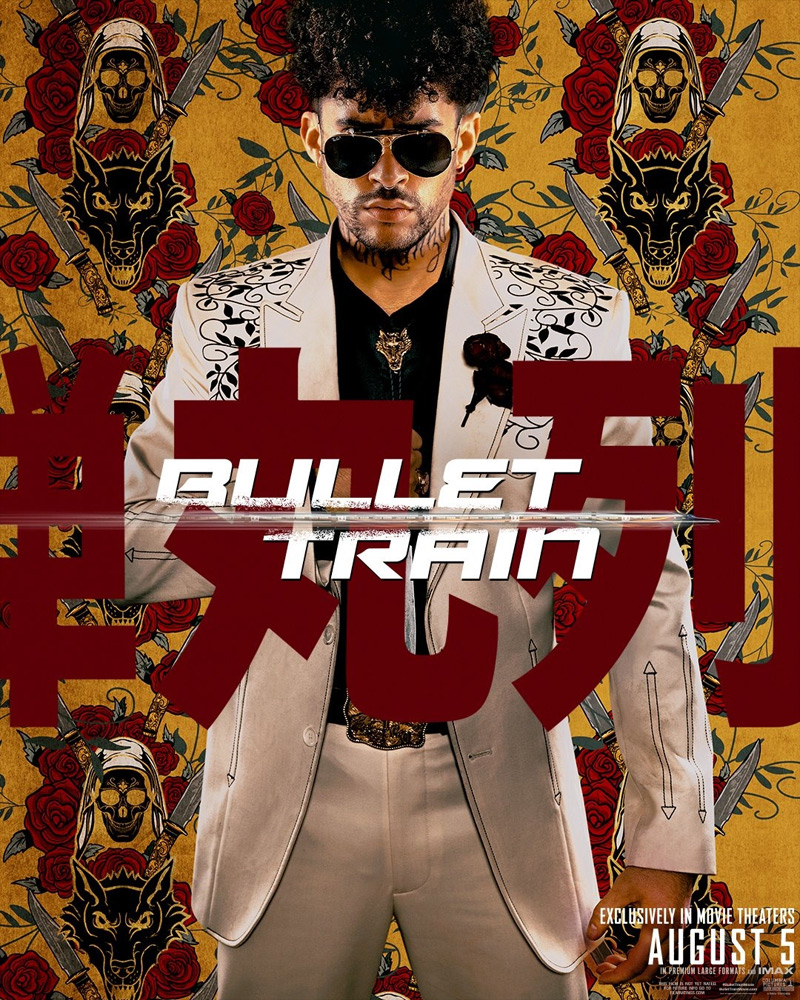 You can rewatch the first full trailer for David Leitch’s Bullet Train here, or the killer second trailer here.

In Sony’s action movie Bullet Train, Brad Pitt stars as “Ladybug”, an unlucky assassin determined to do his job peacefully after one too many gigs gone off the rails. Fate, however, may have other plans, as Ladybug’s latest mission puts him on a collision course with lethal adversaries from around the globe – all with connected, yet conflicting, objectives – on the world’s fastest train…and he’s got to figure out how to get off. Bullet Train is directed by American stuntman / filmmaker David Leitch, director of the films John Wick, Atomic Blonde, Deadpool 2, and Fast & Furious Presents: Hobbs & Shaw previously; he also works as a stunt coordinator & stuntman. The screenplay is written by Zak Olkewicz, adapted from Kôtarô Isaka’s novel. Produced by Antoine Fuqua, David Leitch, and Kelly McCormick. Sony Pictures will release Leitch’s Bullet Train movie in theaters starting August 5th, 2022 this summer. Do you have your tickets?