Tanger Factory Outlet Centers Inc (NYSE:SKT) is attracting heightened discussion on r/WallStreetBets, the forum that came to light with the short squeeze in GameStop Corp (NYSE:GME) stock earlier in the year.

What Happened: The North Carolina-based real estate investment trust which operates factory outlet centers had a comments volume of 600 on WallStreetBets as of press time, as per SwaggyStocks data, and was the top-trending stock in the community in the near-term.

Several users were pointing to what they said is a short squeeze opportunity. One forum member claimed he “just had to buy” Tanger stock as Melvin Capital and Citadel are short on it.

Another user who goes by the handle “FiveDollarPutLong” noted the announcement of a quarterly dividend of 4.33% and delved into the company’s charts in a post on Wednesday night. 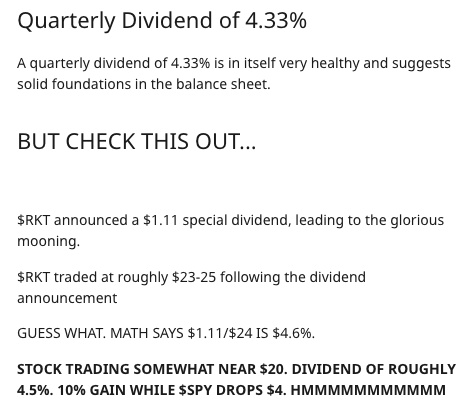 Why It Matters: Tanger is the second most shorted stock after GameStop — attracting short interest or 39.98%, according to High Short Interest Stocks, a website that tracks stocks with short interest over 20%.

The company was affected badly by the COVID-19 pandemic as most of the occupants of their outlet centers are non-essential businesses, the Motley Fool reported.

However, the company’s fourth-quarter results indicated that it managed to attract customer traffic at 90% of 2019 levels and collect 95% of billed rent in the same period.

Some of the positives related to the latest results have been noted by the WallStreetBets participants.

Another emerging darling of the Reddit crowd is Rocket Companies Inc (NYSE:RKT), which was the second most discussed firm on the discussion board attracting over 3,700 comments as of press time.

Photo by Billy Hathorn on Wikimedia

Student shot by classmate at Arkansas high school has died

Volaris, the Lowest Cost Publicly Traded Airline in the Americas reports Strong Liquidity Position of Ps.8.7 billion as of March 31, 2021

Mad About Manga | Learn How To Draw Manga Characters
December 30, 2020

Mad About Manga | Learn How To Draw Manga Characters