The mother of George Floyd’s daughter has launched a $250 million legal bid against Kanye West after his controversial comments about his death.

West claimed that Floyd, who was murdered by Minneapolis cop Derek Chauvin in May 2020, died after taking fentanyl and the police officers knee ‘wasn’t even on his neck like that’.

Now Floyd’s family have issued a cease-and desist letter to West, 45,  for the comments he made on the Drink Champs podcast, which has since been deleted.

Roxie Washington, the mother of Gianna Floyd, claims in the lawsuit that West made ‘false statements’ about George to ‘promote his brands’.

The lawsuit also claims that he made the comments to ‘increase marketing value and revenue for himself, his business partners, and associates.’

Civil rights activist and attorney Lee Merritt first hinted at a potential lawsuit on Sunday, despite conceding that it is impossibly to defame the dead.

Lawyers say that West used ‘malicious falsehoods’ about Floyd to profit from his death and the families trauma.

Nuru Witherspoon, a partner at The Witherspoon Law Group who is representing the family, said in a statement: ‘The interests of the child are priority.

‘George Floyd’s daughter is being traumatised by Kanye West’s comments and he’s creating an unsafe and unhealthy environment for her.’

West claimed that Floyd, who was murdered by Minneapolis cop Derek Chauvin in May 2020, died after taking fentanyl and the police officers knee ‘wasn’t even on his neck like that’ 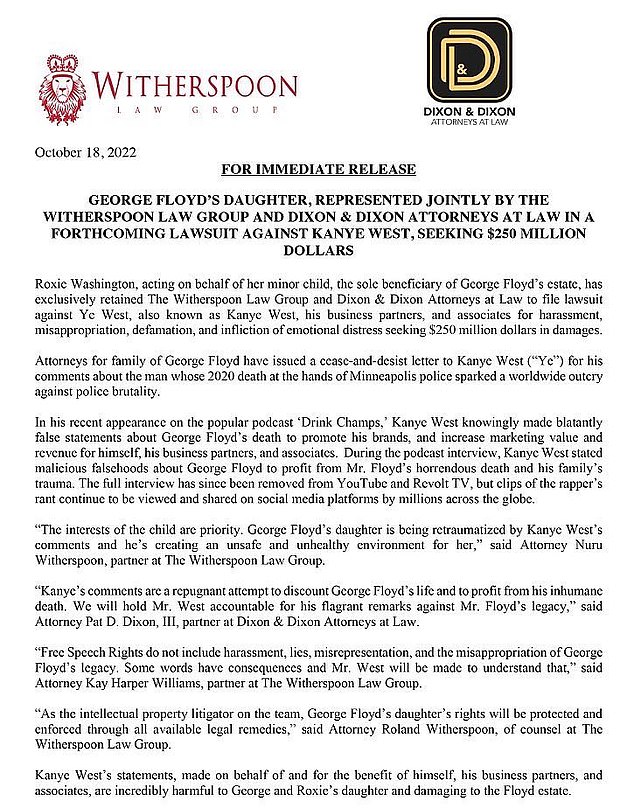 Roxie Washington, who had daughter Gianna with Floyd, has filed a $250million lawsuit against West for his comments 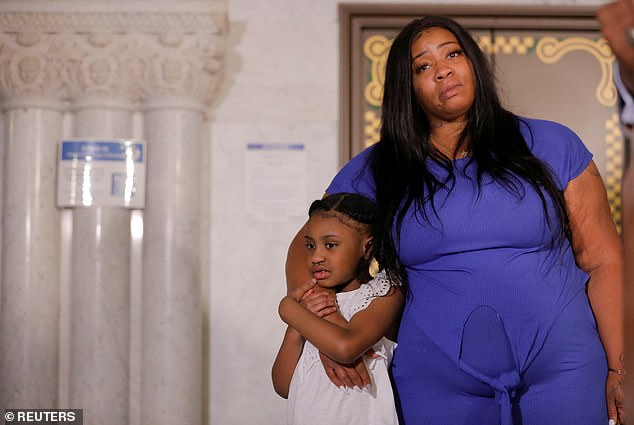 Floyd’s family have issued a cease-and desist letter to West, 45, for the comments he made on the Drink Champs podcast, which has now been taken down

The press release by the family’s legal team brand West’s comments as ‘repugnant’, adding: ‘Some words have consequences and Mr West will be made to understand that.’

West made the wild claims during an appearance on Revolt TV’s Drink Champs podcast, and  made several other controversial statements in the latest of his outbursts.

He made the claim about Floyd’s death while giving a glowing review of the Candace Owens documentary The Greatest Lie Ever Sold: George Floyd and the Rise of BLM.

The rapper said:  ‘They hit [Floyd] with the fentanyl. If you look, the guy’s knee wasn’t even on his neck like that.

‘They said he screamed for his mama; mama was his girlfriend. It’s in the documentary.’

Floyd died because Chauvin had pressed his knee to Floyd’s neck for nine-and-a-half minutes as he shouted ‘I can’t breathe.’ 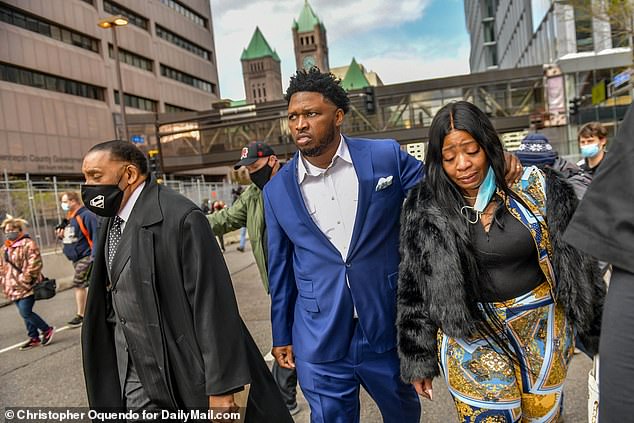 Roxie, right, has launched the lawsuit on behalf of the family and her daughter, Gianna, who she shared with Floyd 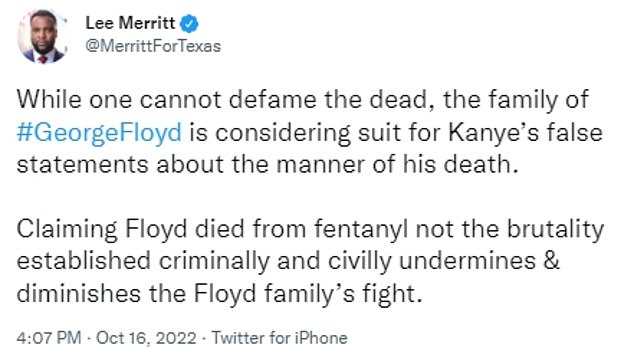 Civil rights activist and attorney lee Merritt first hinted at a potential lawsuit on Sunday, despite conceding that it is impossibly to defame the dead 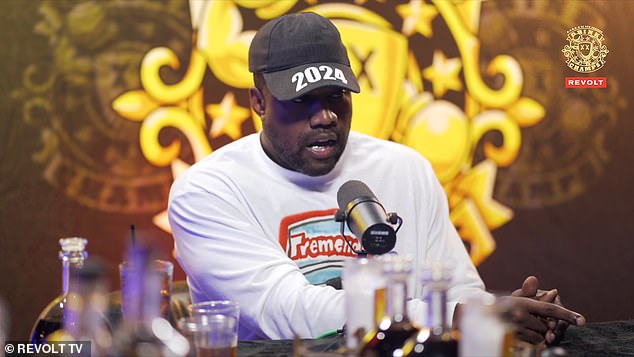 He made the claim about Floyd’s death while giving a glowing review of the Candace Owens documentary The Greatest Lie Ever Sold: George Floyd and the Rise of BLM 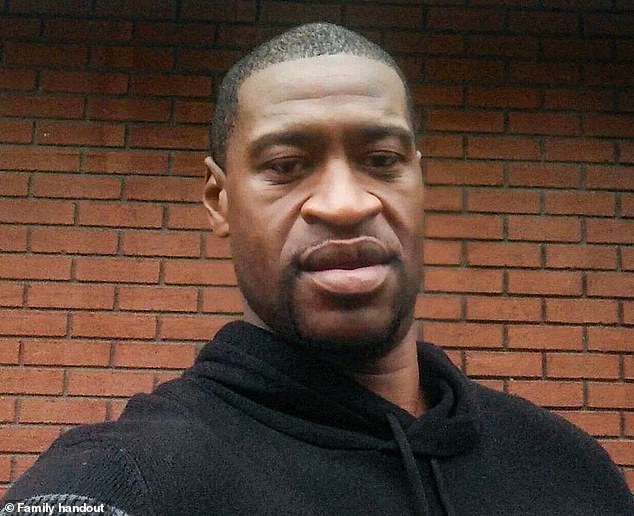 West claimed that George Floyd was killed by a fentanyl overdose, instead of suffocation at the hands of police brutality

Hennepin County Chief Medical Examiner Dr. Andrew Baker said that while Floyd’s heart disease and use of fentanyl were contributing factors to his death, they were not the direct cause.

During the podcast he also implied that Kris Jenner, 66, had sex with Drake, 33, and say ‘Jewish media’ censored an interview of his.

In other parts of the chat, West said ‘Jewish people control the black voice’ and sarcastically stated the ‘Jewish media’ would cancel one of the hosts for saying: ‘F**k Black Lives Matter.’

The father-of four has faced criticism in recent weeks for his bizarre behavior, including introducing a series of shirts branded with ‘White Lives Matter.’

He has also made several eyebrow-raising comments that have been widely regarded as anti-Semitic. 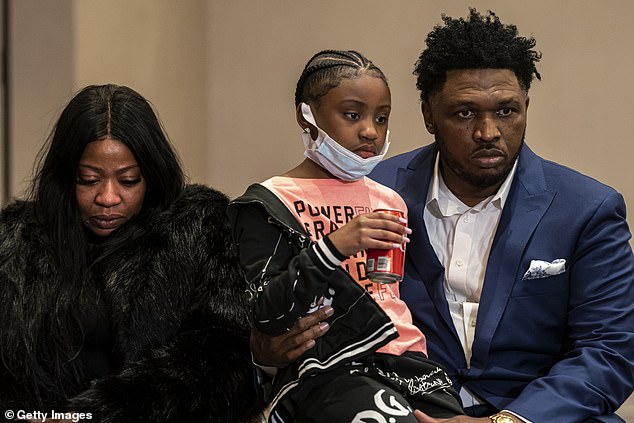 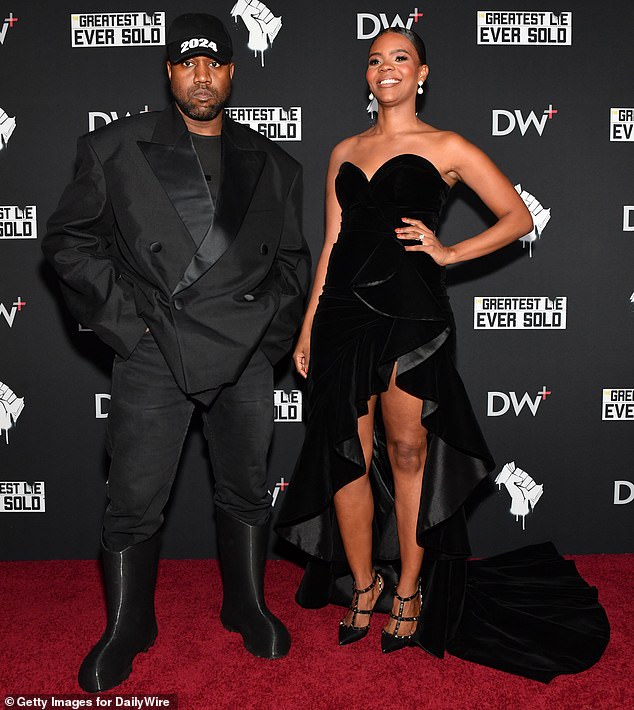 The rapper, who has a history of mental illness, appeared at the Nashville premiere of Candace Owen’s new documentary, The Greatest Lie Ever Sold, which accuses the BLM organization of misappropriating millions of dollars in donations

‘I’m lit right? I’m lit. JP Morgan, I put $140 million in JP Morgan, and they treated me like s**t. So if JP Morgan Chase is treating me like that, how are they treating the rest of y’all?’

JP Morgan Chase last week ended its relationship with West, giving him until November 21 to remove his funds from their bank.

On Wednesday, it was announced that West’s interview on The Shop, would not air, claiming it was because West: ‘used to reiterate more hate speech and extremely dangerous stereotypes.’

LeBron James, the usual co-host of the show, was not present for the taping of West’s episode.

The Life of Pablo rapper also declared that his one-time rival Drake was the ‘greatest rapper ever,’ and from there went on to insinuate that his former mother-in-law, Kris Jenner, had sex with the Canadian artist.

Corey is of course Jenner’s long time boyfriend, Corey Gamble, who West has previously referred to as being ‘Godless.’

During the interview, West also says that: ‘Jewish people have owned the black voice. 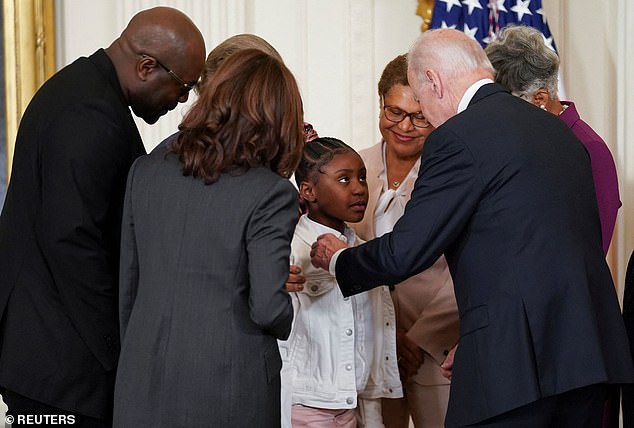 Hennepin County Chief Medical Examiner Dr. Andrew Baker said that while Floyd’s heart disease and use of fentanyl were contributing factors to his death, they were not the direct cause 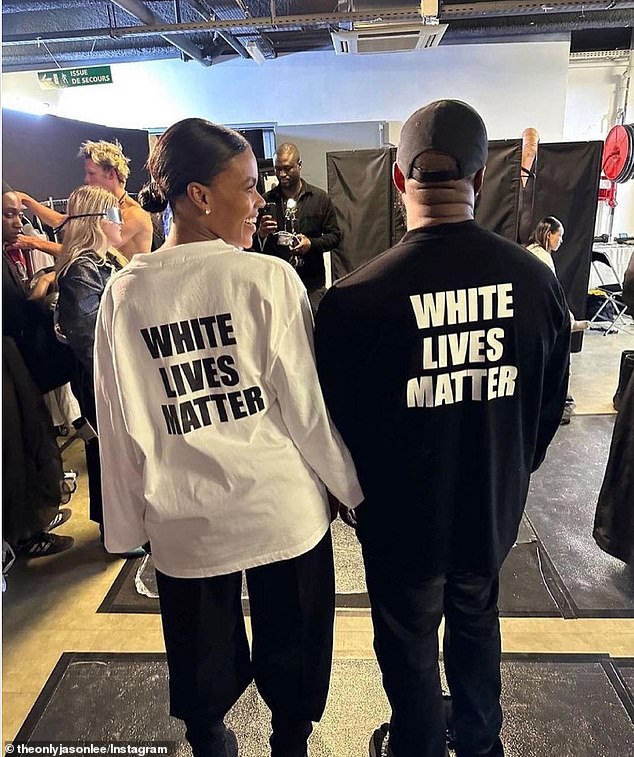 ‘I respect what the Jewish people have done and how they brought their people together. You know they came into money through the lawyers.

‘After Wall Street, when all of the Catholics, they wouldn’t divorce people, so the Jewish people came in they were willing to divorce people and that’s when they came into their money.’

West said that he and other black people are the ‘darker Jews’ as they are part of the 12 lost tribes of Israel.

The rapper said that venture capitalist Ben Horowitz once called him to complain that Jay-Z was giving away ‘Jewish business secrets.’

At one point in the interview, Noreaga took West to task over his wearing of White Lives Matter shirt.

The Queens-born rapper said to West: ‘When you wear the White Lives Matter shirt it kind of takes away from everything from black people because what it is, the same way you wore the confederate flag and we’re like: ‘Damn.” 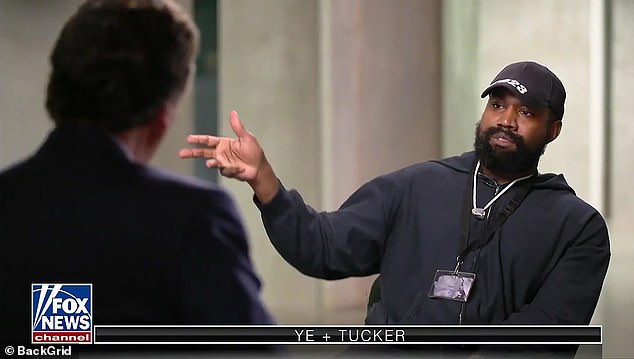 West also spoke with Fox News’ Tucker Carlson recently about the shirts and said he does ‘certain things from a feeling, I just channel the energy. It feels right, hits using a gut instinct, connection with God and just brilliance’ 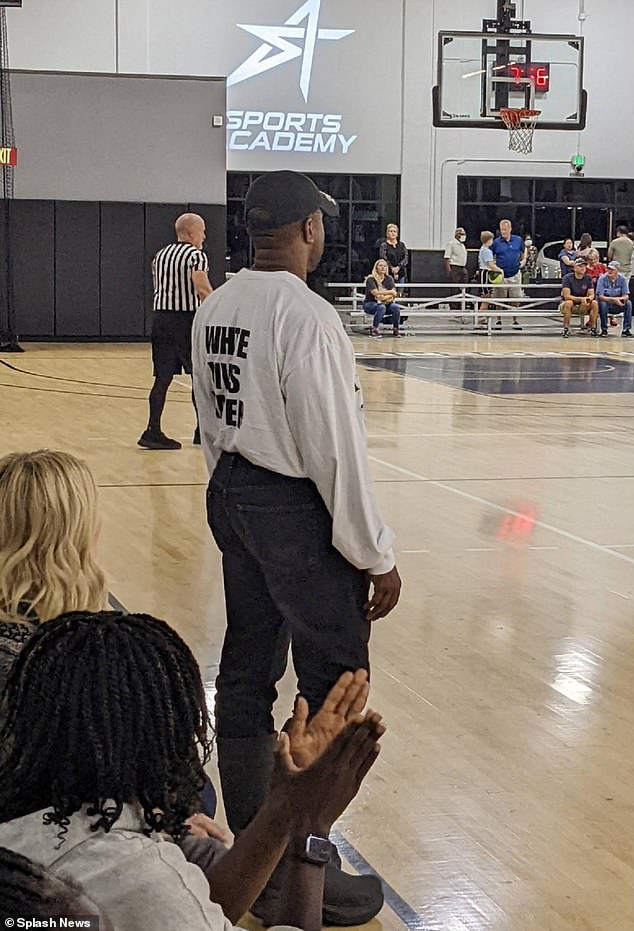 West has been in the hot seat recently for his White Lives Matter T-shirt, which he was seen recently wearing to his daughter’s game (pictured)

‘I’m a real n***a in the streets everyday. But even me I question, why would you try to, I mean even when you said: “George Floyd, I can prove that somebody wasn’t on his neck.” We don’t even care about that Ye.’

The host said: ‘We know White Lives Matter. We know that. But Black Lives Matter when we are getting killed every f*****g single day. We have to notice that.’

Then it was West’s turn again as he told the host: ‘But since that happened we haven’t got killed less we got killed more. We broke more s**t up.’

Noreaga implored West to tell them: ‘We’re really killed out here.’ West responded by saying that t-shirt won’t change that.

Infamously, West said of the anti-Semitism allegations: ‘The funny thing is I actually can’t be Anti Semitic because black people are actually Jew also. You guys have toyed with me and tried to black ball anyone whoever opposes your agenda.’

West was previously suspended by Instagram for 24 hours in March for directing a racial slur at Trevor Noah, The Daily Show host.

In a statement Twitter confirmed that West was locked out of his account because of a ‘violation of Twitter’s policies’ but did not specify which had been broken.

His comments about the Jewish community have been hit with a huge public outcry from the American Jewish Committee, branding his language as ‘anti-Jewish’ and ‘dangerous.’

They also referenced his comments on the Tucker Carlson show on Thursday, in which he accused Jared Kushner, who is Jewish, of brokering the Abraham Accords to ‘make money.’

This week, the Holocaust Museum in Los Angeles invited the Chicago rapper to visit their exhibitions. The museum said in an Instagram post: ‘Words matter and words have consequences Ye.

‘We urge you to come visit us at Holocaust Museum LA to understand just how words can incite horrific violence and genocides.’The Holocaust started with only words that sadly begat stereotypes, racial and religious tropes and blaming others and led to the murder of six million Jews.’

According to the American Jewish Council, Jewish people are the targets of 60 percent of religious hate crimes in America despite making up two percent of the population.

90 Day Fiancé: Deavan Breaks Her Silence After Being Hurt By Cruel Fans